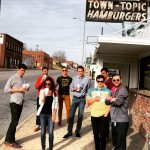 Thanks @Cremalab for the tweet and great photo on Wednesday!
What do we do when it’s 70 degrees in January? Get @TownTopicKC shakes of course! ‪#‎KC‬ ‪#‎kccrossroads‬ pic.twitter.com/Or5I8N9CPl 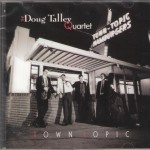 If you’re a Kansas City jazz fan, no doubt you’ve heard The Doug Talley Quartet play around the city. The Quartet holds a special place in Town Topic’s heart, not only for their talent, but because their first CD was called, Town Topic. Talley says he wrote Town Topic as a tribute to our well-loved KC landmark in 1995, saying TT stood out in the late night downtown scene, and reminded him of the Edward Hopper painting, “Nighthawks.”

Talley says they still get requests for Town Topic whenever they play. He says one of the greatest compliments he received was when he attended a high school jazz festival several years ago, and one of the bands performed Town Topic!  It was quite a surprise since Talley was the only one who had the written music. Turned out, one of the band students was a fan of the Quartet, liked the recording and took the effort to write it out for his high school jazz band.

Talley says he likes going to Town Topic for a burger and a Coke, and also loves the milkshakes.  In Talley’s mind the Broadway location is THE Town Topic. He started eating there late nights in the 1980s after playing at the now defunct Boulevard Beat.  After the gigs, they would pack up their horns and walk around the corner to have a midnight burger.

Not only is their CD titled Town Topic, the CD cover was photographed at the Broadway Town Topic. The photographer kept running into complications with the camera angle, traffic and people interfering with the shot.  There was even one guy who came up and started using the payphone.  They left him in the shot on the inside cover of the CD, feeling he made the scene look all the more authentic.

The Doug Talley Quartet recently composed and performed soundtracks for silent movies, and are working on new jazz arrangements that they hope to record soon. You can  hear them this summer at the Blue Room and around the city at outdoor events.  You can buy Town Topic and all the Quartet’s CDs at www.dougtalley.com.