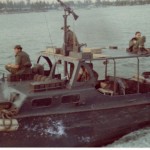 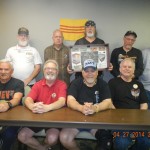 In honor of Memorial Day, we would like to pay tribute to a group of Vietnam veterans who recently stopped by Town Topic.During the Viet Nam War a task force was created to keep the Cua Viet River open for supply lines to the Marines. The “men” on this force were between the ages of 16 and 22, with teams of 5-6 men patrolling the river by boat each night. These men relied on each other to stay alive, and watched as their buddies died. They believed they would remain in co…ntact forever. However, after returning home they were treated horribly by our country, and they put their war memories to back of their mind.

One of the task force members, John Holt, began trying to reconnect with his war buddies after he retired. To date, 33 servicemen have been found. Their third reunion was recently held in Kansas City, where the men spent 5 days in stories and tears. Each believes they could navigate the river with their eyes closed, and many do each night in nightmares more real than waking life.

Please visit their website at http://69lima70.wix.com/atsb-river-rats# to pay tribute to these courageous men. May we never forget that freedom isn’t free.