If you’ve ever been in Town Topic and you saw a man furiously sketching the scene in front of him, you very well might have been witnessing local artist Trey Bryan in a moment of genius. Bryan features several drawings of Town Topic and many other KC 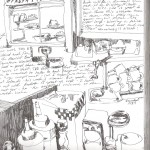 landmarks in his book “Drawings of KC”. Bryan says, “I draw everywhere, sort of filmmaker with a sketchbook. I’ve trained myself to draw really fast, with creative accuracy and composition. I finish one 100 page sketchbook every month, in-between other freelance jobs and traveling.”

Bryan used to manage a group of artists who drew outside of TT on First Fridays, and says the best times he’s had at there were when he’d come in after being at the jazz houses all night. He loves that you never know who you’ll see at TT. All walks of life dine there – could be a local chef who just won a James Beard Award or an internationally known musician and their crew. He describes it as “a circus where the service is always on”.

Bryan loves that TT burgers taste like food – not fast food – but like something out of Norman Rockwell, where the mailman, police officer and farmer would all be in there reading the newspaper to catch up on the day’s events. He tells the story of a time he was at Broadway TT late on a Saturday. The restaurant was crowded, and as he sat waiting for his food and drawing, a man came in, seemingly determined to stir up trouble. Then the guy saw Bryan drawing and said, ‘Hey man, whatcha doing!? You drawing?! Aw, that’s cool, I wish I had that talent!” Then the guy sat down, ate his meal, and left. He distinctly remembers an anonymous customer buying his meal for him that night.

Learn more about Bryan at www.treybryan.com, where you can also purchase his latest book, “That’s My Jazz, Drawings of A Jazz Seen”. 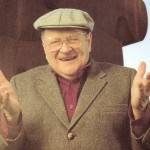 Thinking of Walt Bodine, who would have turned 93 today. The local broadcasting legend passed away in March. It was always a good day when Walt graced Town Topic with his presence. He was always so friendly, and had wonderful stories to tell. Walt loved Kansas City, and Kansas City loved him in return. Gone but not forgotten….

Here she is – Town Topic’s longest-standing employee. Who is it? Come on – you know 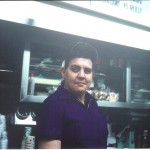 Big thanks to the Kansas City Police Department working hard at First Friday! 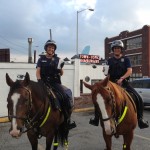 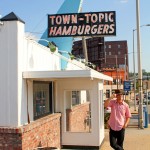 Check out this cool blog post by Reb Stevenson of The Life Nostalgic at http://www.thelifenostalgic.com/town-topic-hamburgers-the-real-deal-in-diners/. Side note – her brother stars as Buddy Holly in The New Theatre Restaurant’s production of The Buddy Holly Story in Overland Park, KS. Catch his show if you’re in OP!

KC singer/songwriter Mark Montgomery wrote his blues tune “Town Topic” after overhearing a conversation where TT cook, Shirley, told an older gentleman,  “If the truth hurts, you ain’t feelin’ no pain!”  The song was born, followed shortly after by a 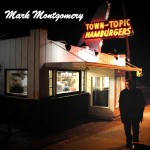 Montgomery has been going Town Topic since he was a child, and hung out there as a teenager. He loves going to TT after downtown gigs, where the staff treats  him like family, and there’s always a comedian at the counter.

Montgomery did a five-week tour in Isla Mujeres, Mexico this winter, recently returned from performing in the Nashville Songwriter’s Festival, and will have a two-week tour to the northeast in August. But his heart is in KC, where he says “Town Topic” is still requested at nearly all his gigs.  Montgomery is constantly writing, and hopes to get back into the studio in October.  His latest release is called “Easyville – American Stories”. Check out his latest music video: “Midnight run to Easyville” on his youtube page.

Read more about this awesome artist and view the Town Topic music video at www.markmontgomerymusic.com. CDs can be purchased through I-tunes, CD baby and  ennegramrecords.com.